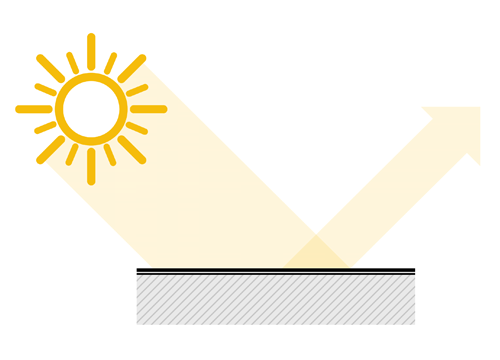 Originally published on November 18, 2015 by BNP Media through the Architectural Roofing & Waterproofing Blog.

Among the three basic forms of heat transfer – conduction, convection, and radiation – the term emittance refers to a material’s ability to release heat through radiation.

Emittance is the ratio of the radiation emitted by a given material to that emitted by a “black body” at the same temperature. This unitless value would be 0.0 if no emittance was possible and 1.0 at the ideal maximum – the theoretical “black body” (i.e., a material with an emittance of unity).

The lower the emittance, the lower the radiative heat exchange. Typically, emittance is related to absorptance (i.e., highly absorptive materials will usually have high emittance) – but they are not the same characteristic. With regard to opaque materials, absorptance directly relates to reflectance.

What is reflectance? How is it different than albedo?

Recall that solar radiation striking a surface will either be reflected, absorbed, or transmitted. The combination of those three phenomena will equal 100% (irregardless of emittance). When referring to opaque materials, solar radiation will not transmit. It will only be absorbed or reflected.

Reflectance is the ratio of reflected light to incident light.